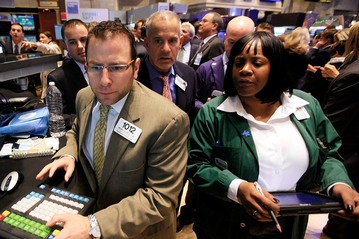 A running debate in the markets for the last few years has been the degree to which exchange traded funds have been driving the ups and downs of underlying stocks that make up ETFs.

A big part of the problem is simply that it√Ę‚ā¨‚ĄĘs difficult to know precisely just how much trading of individual stocks is generated by shares of ETFs being bought and sold, especially if the trading doesn√Ę‚ā¨‚ĄĘt result in ETF shares being created or redeemed (which is more likely to result in the underlying stocks being bought or sold by ETF market makers as part of the ETF basket.)

Then there√Ę‚ā¨‚ĄĘs the question of whether the impact is a positive of negative. Many argue ETFs contribute to volatility (we√Ę‚ā¨‚ĄĘre looking at you VNQ, IYR and RWR!) Seemingly just as many argue that any increase in the trading of the underlying stocks generated by ETF shares is a positive. That√Ę‚ā¨‚ĄĘs because, they say, it increases the volume of stocks that otherwise would be lightly traded as individual names.

Steven DeSanctis, Merrill Lynch√Ę‚ā¨‚ĄĘs head of U.S. small cap strategy, has waded into the question with a lengthy report published today looking at the impact of ETFs on small caps √Ę‚ā¨‚Äú specifically the $16 billion iShares Russell 2000 Index Fund (IWM). DeSanctis looked at the impact from both the standpoint of manager performance and the underlying market.

We think ETFs have had a significant effect on trading volume and can also impact both relative and absolute performance. When ETF flows were strong, active managers tend to struggle to get ahead of their benchmarks and when flows were weak, managers tend to outperform.

DeSanctis crunched the numbers and came up with some estimates of how much of individual stock trading volume can be traced to trading in the IWM ETF.

In 2011, we estimated that the IWM saw $384.2 million dollars of flows on an absolute basis each day, this is both inflows and outflows. We then took the current IWM holdings and their respective weights in the ETF and multiplied each name by the $384.2 million. This represents the theoretical dollar amount traded each day by each name. We then divided this figure by the stock√Ę‚ā¨‚ĄĘs current price to come up with the average number of shares that could hypothetically traded by the ETF on daily basis. Lastly, we took this share amount and it divided by each stock√Ę‚ā¨‚ĄĘs 52-week average daily volume to get the percent of trading volume potentially traded by the IWM. We then quintiled the universe by market cap bucket and looked at size buckets. √Ę‚ā¨ŇďWe estimate that the IWM could represent about 5.4% of the index√Ę‚ā¨‚ĄĘs overall volume, with the smallest names (in Q5) seeing the ETF represent 8.0% of the total trading volume. In contrast, the ETF could represent just 3.6% of the largest market cap quintiles trading volume. Breaking it out by size bucket, we see that the ETF could be 7.7% of the volume for names under $250 million as opposed to 3.7% for those companies with market caps above $1 billion.

Where the impact has really shown up, DeSanctis data suggests, is in correlations. Taken at face value, his data would validate lots of grumblings from frustrated stock pickers.