This Low Volatility is Dangerous for the Markets

I was invited to speak at a conference recently. As I was presenting my ideas about generating alpha, some folks were nodding their heads gently in approval, some were doing their BlackBerry prayer, and some were simply Ă˘â‚¬Ĺ“not presentĂ˘â‚¬Âť. Typically thatĂ˘â‚¬â„˘s how it would end: some exchange of ideas, a nice conversation, but no more.

But I had more to say. I started talking about volatility and how it effects the generation of alpha. The affect, unintentionally so, was amazing: the heads went up, the BlackBerries went down and the room became focused. It was as if everyone had been given an intravenous injection of Ă˘â‚¬Ĺ“5 hour energyĂ˘â‚¬Âť.

So what is it about Ă˘â‚¬Ĺ“thatĂ˘â‚¬Âť volatility? The standard textbook definition that I teach to my finance students, when I am not managing client portfolios, is that volatility (or standard deviation) is the square root of variance, which is the sum of squared deviations of stock returns from its mean. Now if that is not a mouthful, I donĂ˘â‚¬â„˘t know what is. It is certainly not this definition that makes people pay attention. A more common definition of volatility is the riskiness of a security.

There is something about volatility that simply gets everyoneĂ˘â‚¬â„˘s attention. Although I wish I could take credit for what the reaction I got at the conference, it was the mention of volatility that generated the excitement. Volatility typically brings out gut reaction and gets everyone excited. It is like a roller coaster, exciting and scary and the same time.

The higher the volatility the stronger our reaction, like the Cony Island roller coaster, up and down, with butterflies in our stomach. It is exciting and scary at the same time.

It is well documented that current volatility is considered Ă˘â‚¬Ĺ“lowĂ˘â‚¬Âť. The chart below shows the level of the S&P 500 index on the left scale and the rolling twelve months volatility on the right scale. 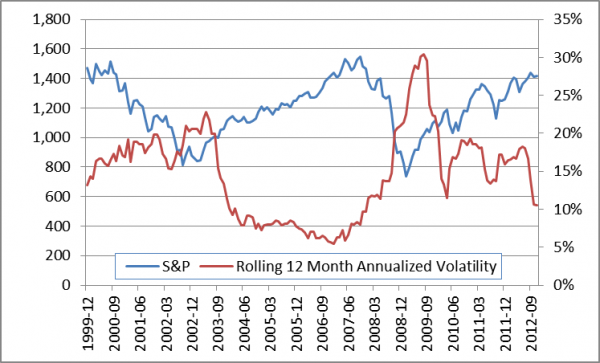 The reason everyone perked up when I started speaking about volatility is that I raised an issue that everyone has buried under the carpet as of late. And that is that no one in the audience (or outside, including my companyĂ˘â‚¬â„˘s clients) believes that volatility should be this low, but we donĂ˘â‚¬â„˘t talk about it.

There are many things that are driving this view. The economy is sluggish and the main barrier to growth is the unemployment, which is stubbornly high. We have the Ă˘â‚¬Ĺ“fiscal cliffĂ˘â‚¬Âť situation that if not resolved, can potentially slow down the recovery. The European recession is in full swing and there is some risk of a breakdown of the European monetary union. The on again, off again crisis in the Middle East, both in Syria and more significantly, the confrontation with Iran, can drive even more uncertainty in the world markets.

But more commonly, implied volatility is called a fear factor or some contrarians call it the complacency factor, depending on what your own perspective of the market. We even have a well established index that tracks this; it is VIX, of course, which is the 30 day, derived (implied) volatility based on current S&P 500 option pricing. 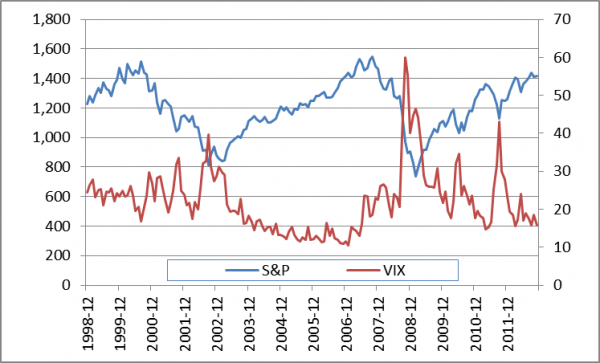 Looking at both charts, we could conclude that investors are confident of the future market direction, and despite many domestic and global uncertainties, they donĂ˘â‚¬â„˘t foresee major market gyrations in the near future.

That, of course, can be the end of the story, but unfortunately it does not satisfy my own curiosity, nor does it allay any of my risk averse fears. Fortunately, there is another way of looking at volatility, which may provide some answers to us, or at least allow us a glimpse into the future.

A suggested way to look at volatility is through the ratio of implied volatility to historical (realized) volatility. The chart shows the level of the S&P 500 index on the left scale and the ratio of VIX to the rolling twelve months volatility on the right scale (the ratio of IV/HV or Implied Volatility divided by the Historic Volatility). 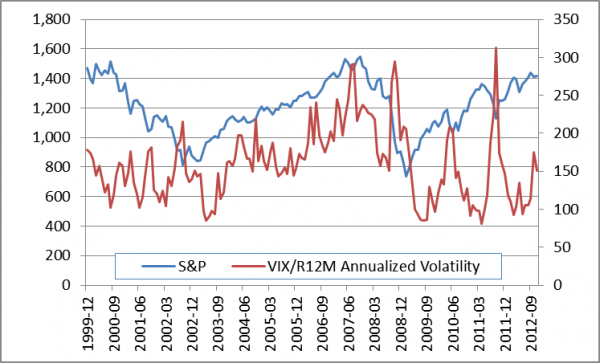 The swings are large and that does not bode well for the market. What this last period is telling me is that although the market has been going up, investors are highly skittish and nervous. Clearly, this does not tell us what the market or what the volatility will be next year, but it does confirm what everyone is thinking and that that our economic and market future is shaky. A prudent investor should be conservative and allocate less to risky assets and more to alternative strategies, which are non-correlated to the major market indices.