Dozens of articles have touted the benefits of hedging in a market like the one weĆ¢ā‚¬ā„¢ve experienced in the past weeks. And thereĆ¢ā‚¬ā„¢s no doubt that hedging provides insurance in a volatile market. But is it worth the cost on the upside?

To answer that question I took a close-up look at two published portfolios, one long-only and one Ć¢ā‚¬Å“hedgedĆ¢ā‚¬Ā¯ portfolio. You may be surprised at the story told by these two portfolios, but let me first review the two different strategies.

A long-only portfolio is just that: a portfolio comprised of long positions only. It is basically a buy-and-hold strategy, although the holding time varies with the investor. But however long you plan to hold a position, youĆ¢ā‚¬ā„¢re betting the marketĆ¢ā‚¬ā€¯specifically the stocks in your portfolioĆ¢ā‚¬ā€¯will increase in value.

A hedged portfolio typically includes long and short stocks, and it can be constructed in a multitude of ways. The proportions between long and short positions in the portfolio can vary with market conditions and personal preference, but a traditional hedge (absolute return) is balanced by equal amounts of long and short positions. Options are a useful alternative as well. A well-chosen put can limit risk, leave the investor with an opportunity for a hedged return, and provide Ć¢ā‚¬Å“insuranceĆ¢ā‚¬Ā¯ against sudden market corrections. If you have a 401K or an IRA, where shorting is restricted, a put or call option or trading the SPYĆ¢ā‚¬ā„¢s Volatility Index (VIX) are alternatives to Ć¢ā‚¬Å“insureĆ¢ā‚¬Ā¯ your portfolio against the bears. As I will demonstrate, hedging can smooth out the volatility in an investorĆ¢ā‚¬ā„¢s portfolio, but obviously at some Ć¢ā‚¬Å“costĆ¢ā‚¬Ā¯ in rising markets.

ArenĆ¢ā‚¬ā„¢t shorts riskier than longs anyway? They are because you are betting that the company will lose stock value while itĆ¢ā‚¬ā„¢s earnestly attempting to grow its business. Stocks also tend to be carried by the market as a wholeĆ¢ā‚¬ā€¯when life is good, everyone feels good about what they own. However, as weĆ¢ā‚¬ā„¢ve seen in the recent weeks, the opposite is true when life is not good and stocks are carried lower.

But are shorts riskier than having a portfolio consisting entirely of long positions? A hedged portfolio mitigates the violent volatility of the market and ensures that not all will be lost, if positive returns seem out of sight. Hedging can even lead to positive portfolio returns in a bear market.

I have graphed two Ć¢ā‚¬Å“Buy and RollĆ¢ā‚¬Ā¯ published portfolios below. The red line is a hedged portfolio, called Investors’ Hedge (IH), and itĆ¢ā‚¬ā„¢s equally balanced at all times between 13 longs and 13 shorts. Each stock is held for a quarter after which it is reevaluated and either renewed, or exited and replaced with another. The blue line is a portfolio consisting entirely of the 13 long positions from the hedge, called Earnings Busters (EB). Below is their performance from April 13, 2009 until August 26, 2011, along with the SPY, shown by the green line. 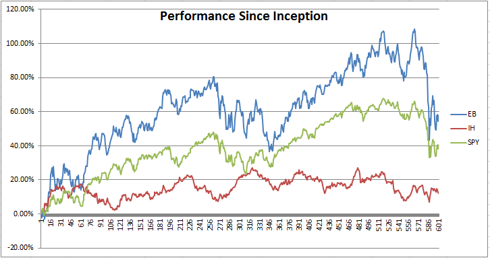 Immediately catching my eye is EB (blue), the long portfolio, significantly outperforming IH, the hedge, and even the SPY over this time frame. However, IH was not as dramatically affected as EB or the SPY by the wild economic lacerations in the last monthĆ¢ā‚¬ā€¯it held its own because of the shorts. When the long side of the portfolio did terribly along with the rest of the market (as seen on the right side of the graph), the shorts performed well enough to match the drop in the longs. The 2009 and 2010 InvestorĆ¢ā‚¬ā„¢s Hedge portfolios, which include the longs from Earnings Busters, are included at the end of the article.

The graph below measures the volatility of IH and EB over the same period from one trading day to the next. It was constructed by taking the difference between the recorded dayĆ¢ā‚¬ā„¢s value and the previous dayĆ¢ā‚¬ā„¢s value. You can see that the hedge IH (red) has remained much less volatile than EB (blue), especially in the tumultuous month of August. Now that kind of consistency might get you a better nightĆ¢ā‚¬ā„¢s sleep than the longs or maybe even any Sleep Number bed that talk radio throws at you.

But there is a cost to being long-only. Consider the hedged performance versus the longs and the SPY from April 2010 through September 2010.

The Cost of the Long

The graph above displays the power of a hedged (red) portfolio. Not only is IHĆ¢ā‚¬ā„¢s volatility less than either EB or the SPY, but it steadily climbed over the period to nearly 20% gains. A hedged portfolio tends to do exceptionally well in bear markets by gaining value, as seen above, as well as making moderate gains in bull markets. This is the Ć¢ā‚¬Å“costĆ¢ā‚¬Ā¯ of an entirely long portfolio.

ItĆ¢ā‚¬ā„¢s not much of a cost when you look at how much better the longs performed overall against the hedge (in the first graph)Ć¢ā‚¬ā€¯but in the severe market corrections of 1987, 2000, and 2008, a hedge wouldĆ¢ā‚¬ā„¢ve been life-saving.

What makes the hedge attractive is that a significant amount of the 100+% long return could have been saved with the right discretionary moves in place and with perfect hindsight of course! Ideally, a hedged portfolio consists of shorts or puts that are likely to fall in price in down markets, increasing IHĆ¢ā‚¬ā„¢s gains, but will not rise at the rate that longs would in up markets. The result is a strong portfolio resistant to heavy market swings that makes modest gains. And you get a better nightĆ¢ā‚¬ā„¢s sleep.

ItĆ¢ā‚¬ā„¢s important to be aware that in a bull market, a hedge can weigh down your portfolio which was obvious in the first graph. Your longs may be growing, but so are your shorts, and if theyĆ¢ā‚¬ā„¢re keeping up with your longs, your portfolioĆ¢ā‚¬ā„¢s gains will be limited. Take, for example, the last 9 months since December 2010. In the graph below, the hedged portfolio lost value over this period while the long hit 30% twice.

The Cost of the Hedge

This is the Ć¢ā‚¬Å“costĆ¢ā‚¬Ā¯ of a hedged portfolio.

The shorts have been gaining as much as the longs over the course of 2011, but when the markets fell, the hedge took it like a smooth speed bump at 25 mph. Obviously, in your portfolio, you would want to have the longs free to skyrocket while having the hedges in place so you donĆ¢ā‚¬ā„¢t lose most of your gains.

A successful portfolio uses the hedge with discretion to smooth out the marketĆ¢ā‚¬ā„¢s often unpredictable nature. With intuition about timing and a bit of luck, it can be done.

For the record, I would rather take my chances for 100+% returns over the last two years even with the economic melt-down thrown in. IĆ¢ā‚¬ā„¢d sleep way better sitting on at least 40%, than no progress at all. But as a young, twenty-something, recent college-graduate, I likely donĆ¢ā‚¬ā„¢t share a similar risk perception with some of my readers. My demographic puts me in a category where IĆ¢ā‚¬ā„¢m able to take more risk and volatility for the possibility of higher long-term returns.

Marriage, family, house, and retirement all reduce the risk tolerance of an investor. Steady gains and income take precedence. If that is your case, a hedged portfolio can offer stability and protection against economic headwinds that threaten to blow your gains away.

Disclosure: I have no positions in any stocks mentioned, and no plans to initiate any positions within the next 72 hours.